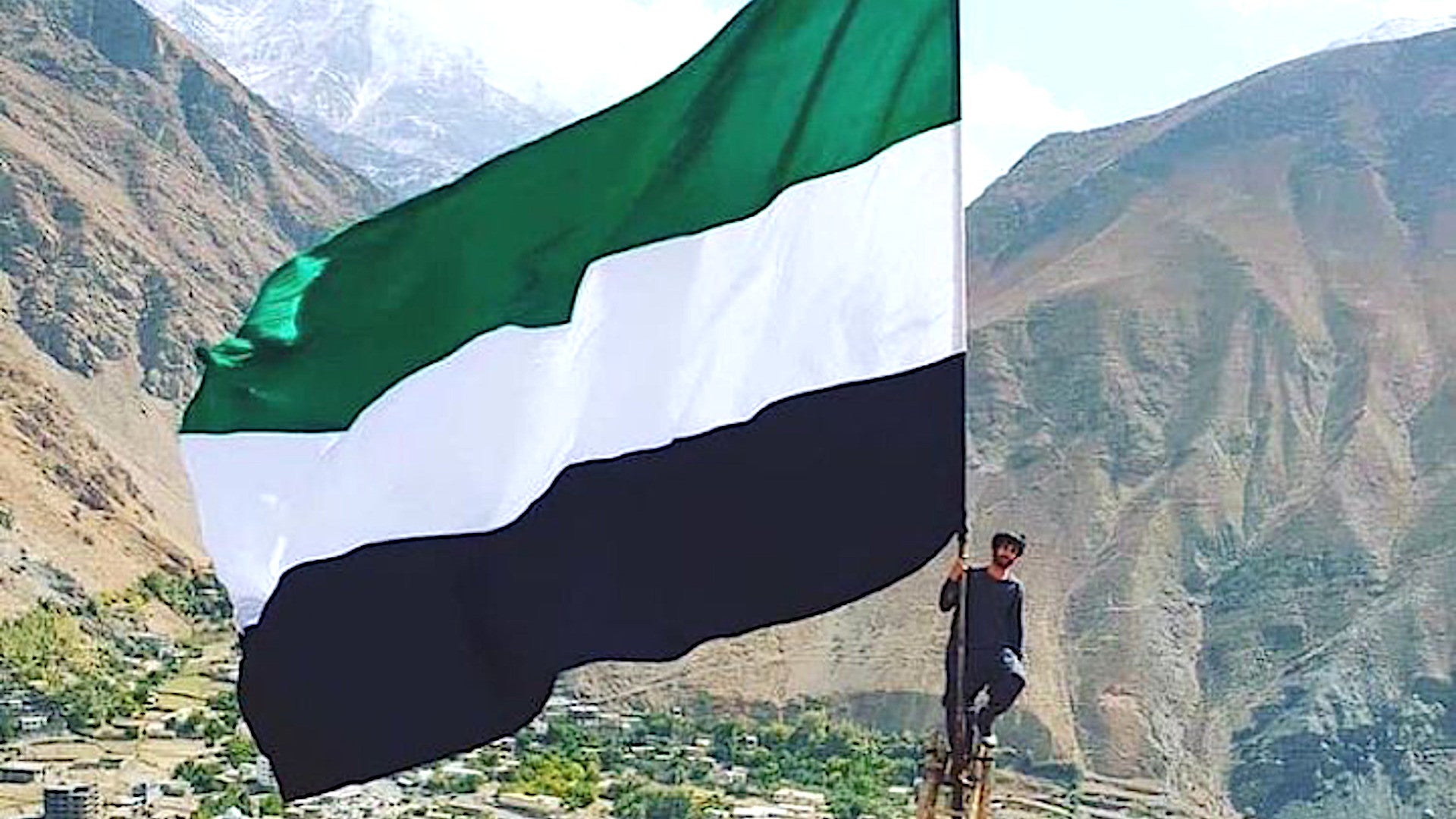 While the Taliban now controls virtually all of Afghanistan, including the country’s capital, Kabul, one region, the Panjshir Valley, remains outside of the group’s tightening grip. Now, a resistance movement is forming there, led by, among others, Amrullah Saleh, who had been First Vice President of Afghanistan until the collapse of the internationally-recognized government this past weekend, and now claims to be the legitimate leader of the country.

Yesterday, in a post on Twitter, Saleh declared himself “the legitimate care taker [sic] President,” citing the constitution of the now all-but-defunct Islamic Republic of Afghanistan, which says the First Vice President assumes this role “in absence, escape, resignation or death of the President.” The Islamic Republic’s last President, Ashraf Ghani, fled the country as the Taliban advanced toward Kabul and unconfirmed rumors are swirling that he and his entourage escaped with $169 million in cash. His whereabouts were uncertain until today, when officials in the United Arab Emirates confirmed he was in their country, having been allowed in on “humanitarian grounds.” 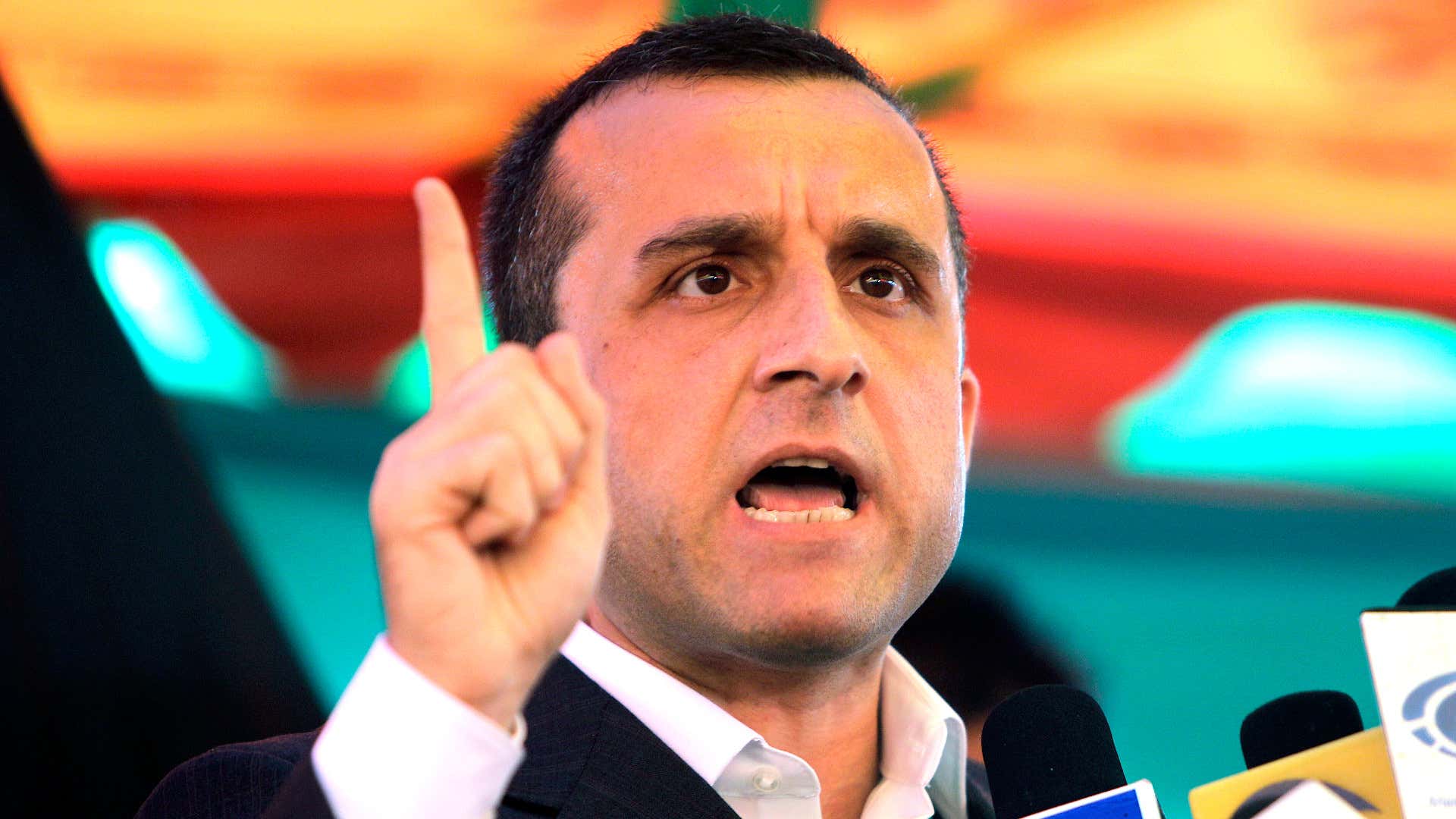 A file photo of Amrullah Saleh at a rally in Afghanistan in 2011.

Saleh says he is still in Afghanistan. Video footage had emerged on Aug. 16 that reportedly showing him, along with Ahmad Massoud and others, boarding an Mi-8/Mi-17 Hip-type helicopter at Hamid Karzai International Airport in Kabul as the relocated to the Panjshir, which only lies some 70 miles north of Afghanistan’s capital.

Ahmad Massoud is the son of Ahmad Shah Massoud, who fought against the Soviets in the 1970s and 1980s and then against the Taliban in the 1990s. The elder Massoud, who became known as the “Lion of Panjshir,” was a prominent member of the Northern Alliance, which the United States leveraged to help oust the Taliban from power in 2001 following the 9/11 terrorist attacks. Ahmad Shah Massoud was assassinated on Sept. 9, 2001, in a suicide attack carried out by individuals linked to the Taliban and Al Qaeda, who were posing as journalists who had come to interview him.

Amrullah Saleh was also a member of the Northern Alliance, as was Bismillah Khan Mohammadi, who had just taken up the post of Defense Minister of Afghanistan in June. Mohammadi has endorsed Saleh’s claim as the country’s legitimate leader and has also called for the arrest of Ashraf Ghani. Saleh was also head of Afghanistan’s National Directorate of Security (NDS), the country’s main intelligence agency, which had deep and controversial ties with the U.S. Central Intelligence Agency (CIA), between 2004 and 2010.

A picture had emerged on Monday that reportedly showed an individual holding the Northern Alliance’s green-white-and-black flag in the Panjshir. Saleh and the rest of the leadership of what are some are now referring to as the Panjshiri Resistance are trying to rally forces to their cause there, including former Afghan government security forces who have evaded the Taliban.

Militarily speaking, the Panjshir Valley, despite being currently isolated and so close to Kabul, could present a challenge, simply due to the complex nature of the terrain, for the Taliban to capture. That group was notably never able to take control of the valley during its first rise to power. Of course, at the time, the Northern Alliance also controlled other surrounding provinces, including ones that provided overland access to neighboring countries, such as Uzbekistan and Tajikistan to the north, through which outside support could more readily flow.

The current size of the Panjshiri Resistance is unknown, while the total size of the Taliban has been estimated to be more than 200,000, including around 60,000 core militants and another 90,000 militiamen aligned with the group. The Taliban’s numbers may have increased just recently, with defections of Afghan security forces and pro-government militias being a key component of their lighting-quick advances leading up to the fall of Kabul on Sunday. The Taliban also captured a significant amount of largely U.S.-supplied military equipment, including armored vehicles and artillery, which can only bolster forces’ capabilities.

However, no matter what the precariousness of the new Panjshiri Resistance’s physical disposition might be, its existence at all presents significant geopolitical complications for the Taliban, as well as outside powers, even just in the near term. The Taliban has already declared the return of its Islamic Emirate of Afghanistan and its leadership is now descending on Kabul to formalize change in power. This includes the group’s co-founder Mullah Abdul Ghani Baradar, who returned, along with others, to Afghanistan from Qatar today. Baradar was released from a Pakistani prison in 2018 as part of ostensible peace negotiations with the U.S. government, the Taliban side of which had been run out of official political office in the Qatari capital Doha.

Taliban representatives have already been working with other notable Afghan figures, including former Afghan President Hamid Karzai and Chairman of the High Council for National Reconciliation Abdullah Abdullah, regarding a peaceful transition of power to the new Islamic Emirate. Abdullah Abdullah notably lost a highly controversial presidential election to Ashraf Ghani in 2019. After Ghani fled, Karzai had announced that he, together with Abdullah Abdullah and warlord Gulbuddin Hekmatyar, were forming an interim authority in Kabul.

Any such formalized transition could help give an air of legitimacy to the Taliban’s conquest of Afghanistan and its claims to power. Amrullah Saleh’s challenge that authority, of course, now presents new hurdles.

It raises concerns about the potential for increased sectarian violence in the country. The Taliban’s membership, like Afghanistan itself, is predominantly made up of ethnic Pashtuns. Saleh, Massoud, and Mohammadi are all Tajiks, an ethnic minority in the country. It’s worth noting that, while the Northern Alliance did include Pashtuns, it was first established by Tajiks, like the elder Massoud, and Afghanistan’s various minority groups still made up a significant portion of the forces under its umbrella by 2001.

Separately, there are already reports that members of the minority Hazara ethnic group are also already trying to get to the potential safety of the Panjshir. The Hazara are predominantly Shia rather than Sunni Muslims, making them a minority in Afghanistan in that respect, as well. Hardline Sunnis, such as the Taliban, have often persecuted Shias, who they see as heretical. There are already indications that this could be the case under the Taliban’s new rule in Afghanistan. Pictures emerged today reportedly showing the destruction of a statue in the city of Bamyan of Abdul Ali Mazari, a Hazara figure who fought the Soviets and the Taliban, and who the latter group is widely believed to have tortured and killed in 1995. The Taliban claimed at the time that he attacked their representatives during a meeting near Kabul.

This, in turn, brings up the possibility that Saleh and his comrades may be able to leverage minority discontent with the Taliban, in particular, to bolster the ranks of the new Panjshiri Resistance inside the country and secure support elsewhere. It’s worth noting that Uzbek warlord Abdul Rashid Dostum,  who had been the Fourth First Vice President of Afghanistan, and Ata Mohammed Noor, a Tajik powerbroker who had been Governor of Afghanistan northern Balkh Province, both managed to flee with forces under their command into Uzbekistan last week. Before escaping the country, Noor accused Ashraf Ghani and his administration of a deliberate conspiracy to step aside and let the Taliban take over, though there has been nothing to substantiate that claim.

Dostum and Noor were also both previously members of the Northern Alliance. Dostum was notably the Afghan commander at the center of the now legendary story of U.S. Army Special Forces soldiers who fought on horseback in the opening stages of the American intervention in the country in 2001.

Disaffected Pashtuns who don’t support the Taliban, both inside and outside of Afghanistan, could be drawn to the new resistance movement, too. More and more reports are coming out about the Taliban brutalizing average Afghans and attacking any who oppose them. At least three people were killed today, and more than a dozen others were injured, in an attack on an anti-Taliban demonstration in the city of Jalalabad.

All of this could hamper the Taliban’s push for formal international recognition, as well. Today, Afghanistan’s Embassy in Tajikistan replaced the portrait of Ashraf Ghani with one of Amrullah Saleh, and the ambassador there,  Zahir Aghbar, says he has rejected the Taliban’s rule. Others may follow, creating the potential for political crises in multiple countries.

Many countries, including the United States, are already adopting a wait-and-see approach with regards to recognizing any new Taliban government. Even, the Pakistani government, which has long been accused of accomodating, if not actively supporting the Taliban and other militant groups opposed to the government in Kabul, has said it won’t rush to offer recognition to the new Islamic Emirate.

Saleh’s claim to be caretaker President can only impact any such deliberations about the legitimacy of the Taliban’s emerging government. At the same time, foreign powers, such as the United States, may try to push back having to answer any such questions until after ongoing evacuation operations in the capital Kabul. The ability of the evacuation airlift at Hamid Karzai International Airport to keep proceeding as smoothly as it can is entirely subject to the whims of the Taliban. The situation continues to be especially tense as foreign nationals and others try to make their way there through Taliban checkpoints. For days already, thousands of increasingly desperate Afghan citizens have been trying to flee the country by air.

All told, even as the Taliban work to consolidate their authority across Afghanistan, forces are assembling to oppose them and the country’s future is far from certain.

The Washington Post has published an op-ed from Ahmad Massoud himself, which he says he wrote from the Panjshir Valley. The piece, which is worth reading in its entirety, confirms the general plan, at least for the time being, to resist the Taliban and includes an appeal to the United States for support.

“I write from the Panjshir Valley today, ready to follow in my father’s footsteps, with mujahideen fighters who are prepared to once again take on the Taliban,” Massoud writes. “We have stores of ammunition and arms that we have patiently collected since my father’s time, because we knew this day might come.”

“If Taliban warlords launch an assault, they will of course face staunch resistance from us,” he continues. “Yet we know that our military forces and logistics will not be sufficient. They will be rapidly depleted unless our friends in the West can find a way to supply us without delay.”

“The United States and its allies have left the battlefield, but America can still be a ‘great arsenal of democracy,’ as Franklin D. Roosevelt said when coming to the aid of the beleaguered British before the U.S. entry into World War II,” Massoud adds. “America and its democratic allies do not just have the fight against terrorism in common with Afghans. We now have a long history made up of shared ideals and struggles. There is still much that you can do to aid the cause of freedom. You are our only remaining hope.”